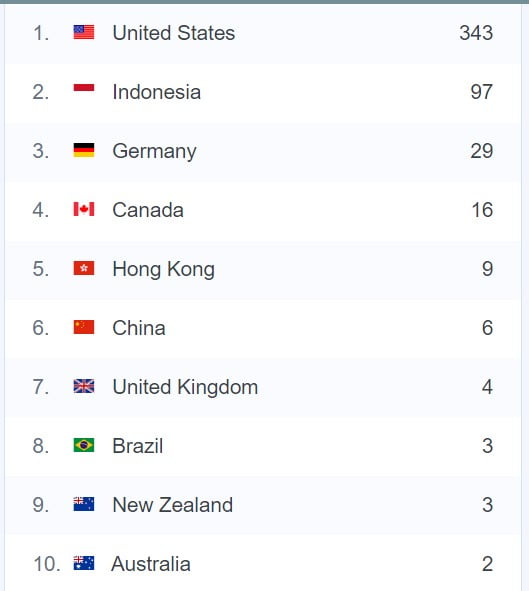 According to today’s Monster Insight report, these are the 10 most active countries viewing the GFGW website of Paul Gautschi’s biography.

SHOCKING! Not that USA was #1, but that Australia (the top foreign buyers of the book) is #10. How can that be? During that country’s lockdown we would mail books to Australia but the local postal carriers were not allowed to deliver them (for whatever reason). So, after paying a lot of $$ to ship them that far, they all came back and if we turned around and shipped them again, we would be paying twice and they would just return them! That was a big reason why I opted to sell the paperback books (for the 1st time) via Amazon. That way, the private delivery companies would get the books to the Australian readers. Hooray! https://www.amazon.com.au/dp/0990755207

I had no idea so many were coming to the site from Germany. Guten tag!

I do not pay any SEO firms to have their ppl in Indonesia to visit my site, so it is perplexing that they are #2. What am I talking about? Well, the old way to trick the Google algorithm into thinking a website was more popular than it really was…was to hire an Search Engine Optimization company that pays pennies per click to somewhat indentured Indonesians (I imagine) to get onto the sites that they’re told to. Thus, if real (interested) ppl click on the GFGW site and spend 120 seconds looking around, but the Indo-clickers get on for only 2 seconds, then the average View Time gets skewed way down.

Adding #s 5 and 6 together is still short of our Canadian friends (at #4). So many ppl in Canada are tracking with Paul Gautschi. He went to Bible College there years ago and it has a special place in his heart. For many in BC, Paul’s place is just a pleasant ferry ride from Victoria to Port Angeles. Costs about $22 per adult in your vehicle. https://www.cohoferry.com/schedule-fares Sequim is the next city east of Port Angeles. Note: you don’t have to have a recent Covid test to ferry from BC to the USA but you do need proof of an approved inoculation.

My question? Where’s Japan? It is a plant-growing culture Paul so admires that culture and built his arboring business around Japanese pruning methods. I suppose you could argue that they’re already doing what Paul does so he is just preaching to the choir there. Maybe. But it’s not so much the methods of Paul Japan needs to hear, but his faith! They do permaculture there, but not Relational Permaculture.

That is, they’ve figured out how God uses rocks in nature to supply plants with needed minerals, but that is different than knowing God. In other words, I am an author. You can know that about me without knowing me personally. Reading GFGW 2nd edition helps ppl know God personally because Paul Gautschi knows God personally and he shares his heart throughout the book. It would thrill Paul to be a small part of an Awakening in Japan. God knows they need it. FYI, the US needs it too!

I just want to say that it is an honor, I don’t deserve, to have a part in the lives of people around the world. I have traveled to just two countries: Canada a # of times and Mexico once. That’s it! Unless you count Texas. It may become a country of its own someday, but let’s hope not.

All in all, thanks to all of you for visiting the GFGW site (even if it’s only 50 seconds of your day). Yep, that’s the average view time, which means I need to finish the 2nd edition Book Trailer video and get it on the Home page. DD