My Amazing APRIL Visit with Paul 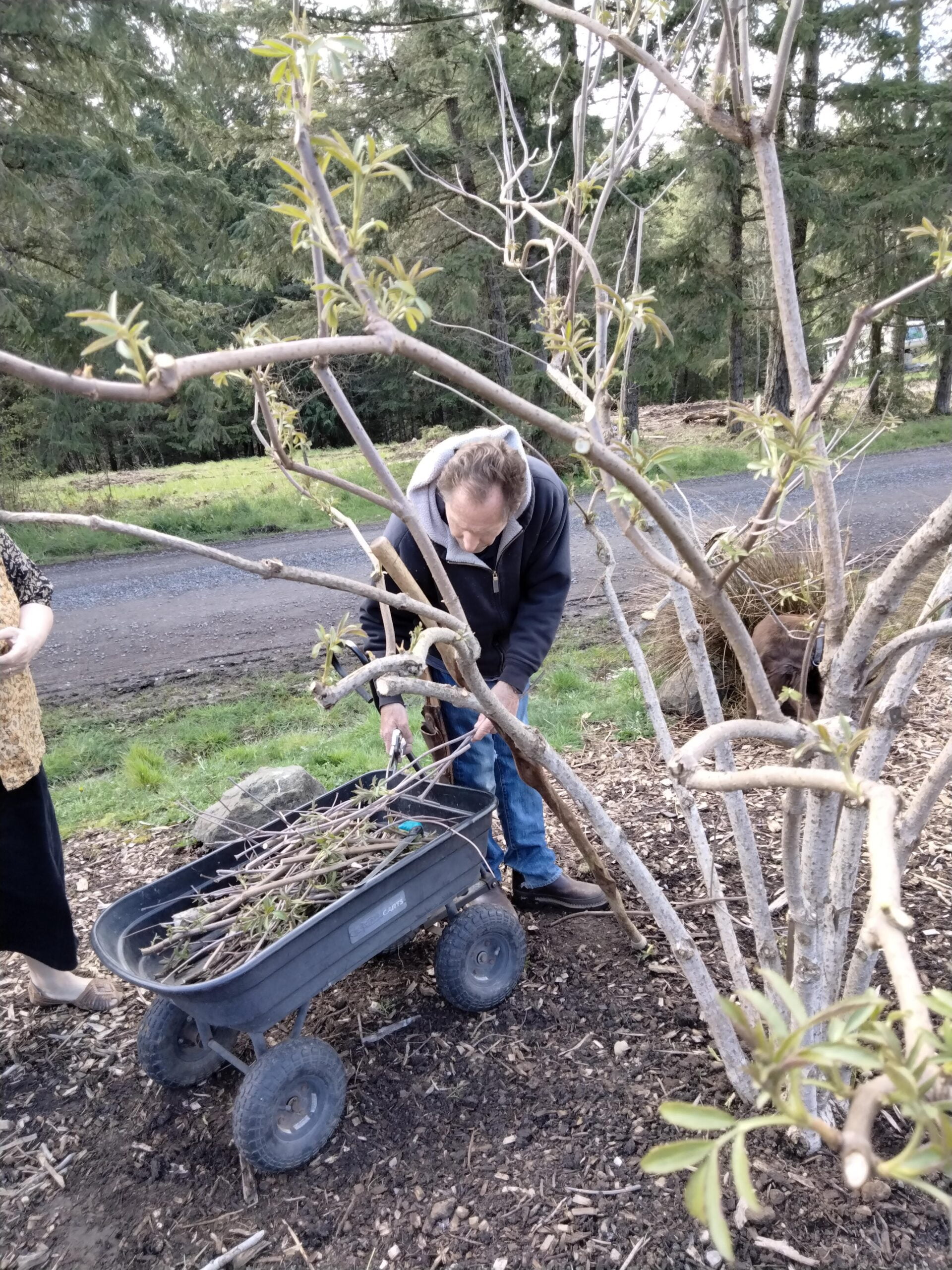 Recently, I got to swing by Paul’s place when I was in Sequim on other biz.

He was home when I called him and said he’d be out working in the garden when my wife and I arrived. Well, he was just exiting his shed to go prune his elderberry tree when we rolled up.

First thing I noticed was freshly spread woodchips along the R side of his driveway. If you have ever been on a Sunday tour with Paul, you’ll recall that the tour begins there – so he can point out some differences between his plants/lawn and his neighbor’s. Pretty revealing!

Next, I saw that Paul was well along with planting (he tries to get that going the 1st week of April). It has been a strange month for weather so far in the Pacific NW. Both Seattle and Portland set records for the latest snow! 2nd week of April, we got dumped with 5″ of wet, heavy, snow. Lots of damage all around.

Today, Paul was pruning his elderberry tree. Believe it or not, the tree used to be on the border with his neighbor. It really didn’t have room to grow there – and was susceptible to the neighbor’s spraying, so Paul moved it along the road – more towards the miiddle of his land. The tree looked so good, I asked how long ago he transplanted it. (Are you ready for this?) “Two weeks,: he said! That is mind boggling. The tree didn’t get the Memo that it was supposed to experience transplant shock. Look at it. Leafing out…no shock here!

PAUL’S SAD NEWS
The day I saw Paul he told me that Micah had been missing for 2 days! He was concerned and defininately missed him. With Nick’s dog Willow (in the background) gone, and Tierza gone, that just leaves Tova III by herself. Micah was such a good protector of the garden and orchard. Now what? Well, I can tell you this. As we drove up, there’s a doghouse on the R and Tova III had just come out of it. Used to be Micah’s I believe. Paul said that ever since Micah went missing, Tova (on her own) now spends the night in that dog house (she always used to lounge on the porch) and actively keeps the deer and other critters out of the area. In other words, Tova II has stepped up and kept the animals from ravaging the orchard and garden (which can happen in mere hours). Yay God!

It was good to see Paul again. Yes…that’s me with a goatee (for now).

Just a reminder that public tours begin the 1st Sunday in June (the 5th). We’ll see if ThatNub from L2Survive will be out there to film it.

PAUL’S WARNING TO YOU (US)

Ever since the Back to Eden documentary came out. Many people viewed Paul’s method of covering as a novelty, but now it’s gotten pretty serious. Already, it can be a challenge to get seeds to plant this Spring. The war and genocide in Ukraine has made a weakened supply chain in the US (and around the world) to the point where we can’t assume that food is just a short drive (or internet order) away.

Adding insult to injury, 27 states in the US have had been impacted by avian flu. Also, most of the fertilizer used by US farmers supposedly came from Russia. Well, that came to a halt! Paul says it is never as critical to save seeds and grow your own food as it is now. The Covid-19 pandemic forced us to figure out what is “essential” in life. The winners? Groceries. Health care. Police protection. Moving goods across the country (ship, train, or truck). Shockingly, keeping churches open did not meet the “essential” standard. That’s for another blog…

Imagine life without Costco, Safeway, Krogers, Aldi, Walmart, Sam’s Club. How long would you survive? Where will your food come from? Proverbs 22:3
A prudent man foresees the evil, and hides [attends to] himself: but the simple pass on, and are punished.