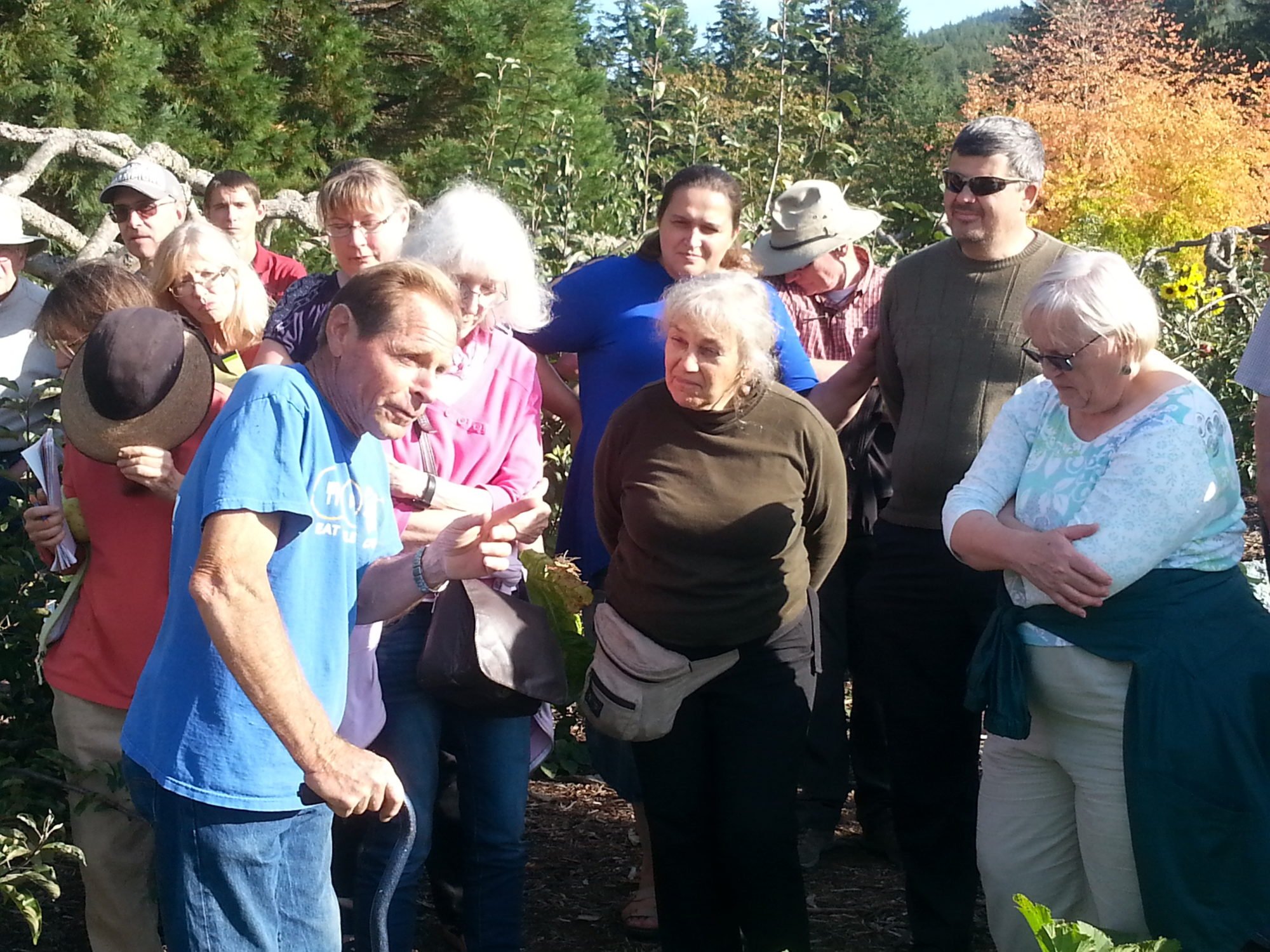 My son Seth & I joined the 30+ people there for the final public tour of the year.

GOING TO THE DOGS

At first, neither of Paul’s dogs were out & about, but I later saw Tova and got to pet Tirza. At the time I was writing the GFGW manuscript, Paul had just gotten Tirza as a young-ish pup, and it wasn’t clear whether she would work   out, so we left her out of the pi 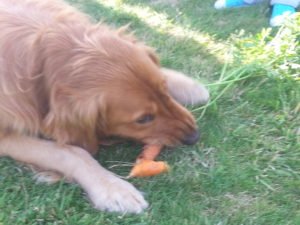 cture 2 yrs ago. That’s why she didn’t appear in the It Takes a Village (of animals & organisms) chapter of the book. Now she has added to the tour experience by doing what Tova used to do as a crowd-pleaser: grab something out of Paul’s garden, then take it to the grass and eat it.
She also continues Tova’s excellent patrol and protection of the garden & orchard all night long. One man asked: “How do you keep the deer out of here?”  Answer: dogs. Well trained dogs. Remember, Paul’s growing areas are unfenced. Totally open.

Do you know who gets some of the best enjoyment from Paul’s summer tours?
Kids? No. Senior citizens? No. Avid gardeners? No.
The hands-down winners are the sheep that pasture right next to the orchard and garden. What do they win? Apple cores, uneaten leaves and such. Kind of becomes a feeding frenzy!

Oh…and the biggest losers? Satan, the father of lies and the people he uses in academia and other places (like garden shops and extension offices) where people spread the same mis-leading information they adopted years ago.
Paul was relentless in exposing lies. Lies about having to plant in full sun. Lies about when and how to prune. Lies about wood chips in general. Over and over he says: “I’m just being straight with you.” He knows that many folks there are hearing (and experiencing) truth for the 1st time. His new word for 2016: influence. Are you operating from God’s influence or Man’s influence?

Paul shared wisdom and truth for 5 straight hours! No breaks…just connecting with the group, giving testimonies, sharing studies, and answering questions. Scripture flows from Paul like a fountain. So does gratefulness and a never-ending awe of his Dad’s greatness, love, and power. He is a joyful man. He is a humble man. He is an obedient man. People love him because he definitely loves others. They can tell.

DIANA ON THE MOVE

Remember the lady that I met at Joel Salatin‘s talk? (At the Mother Earth News symposium in Oregon)
SEE My Afternoon With Joel Salatin.

Well I thought I would never see her again. She lives at the southern Oregon coast, about 6hrs away from my area of Washington. So what are the odds? I walked up to the crowd from behind and was just standing and listening, when a woman glances to me and her countenance lit up like I was a friend she hadn’t seen in 10 years. Well, it was the same Diana! She came to see Paul and ask him to sign her copy of Growing Food God’s Way. LOL

Oodles of apples…and some nice pears.

Monster banana squash. I put my John Deere hat on as a size reference.

Nasturtiums and Russian kale growing under Paul’s apple tree. AMAZING! (but not to God)

In all, I sampled a smidgin of beet and parsley, a grape, had fennel, chives, kale, and cilantro, also a carrot and 3 apples (from the ground). For the 1st time, I wore sandals so I could take them off and get some excellent “earthing” in while touring the garden and herb garden. Soooooooo good for us! It was a little awkward being the only bare-footed human doing this, but I let the benefits outweigh the embarrassment. Later, Paul’s oldest son Aaron and I  talked without shoes on in the garden. He preferred standing there to Paul’s lush lawn.

For those who could not make it, Thatnub from L2Survive shot some video there about 2 weeks prior. Here is a link to his site: https://www.youtube.com/user/L2Survive
If he doesn’t have the last one up yet, you can see the 1st tour of the season (about 3hrs).