My Afternoon With Joel Salatin 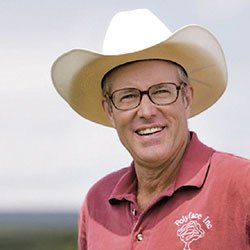 Last Sunday was a warm-breezy day in the Willamette Valley (Oregon). It was the last day of the annual prepper fair hosted by Mother Earth News. They were recently held in Puyallup, WA, but the last two have been in Albany, Oregon (about 1.5 hrs S of the capitol, and 2hrs S of Portland).
My wife and I were hoping to go up to Sequim this day – to enjoy Paul Gautschi’s first tour day of the 2016 season. Thankfully, I hadn’t committed to Paul or anyone on the FB page, because it was a Saturday epiphany that Joel Salatin was going to be within 2+ hours of my house. So…after church, Phyllis & I pointed the vehicle south on I-5.

Joel was scheduled to talk from 4-5pm (at the end of the Fair) so we needed to hurry. We arrived a skinch after 4pm and found Joel was speaking in a big outdoor tent. Did I say it was hot? Like 90 degrees. Off to the left of our seats (in the grass) some young couple with forethought had a small inflatable pool their little ones were playing in (and out of). As riveting as Joel’s speeches are, we found ourselves glancing to the left and fondly desiring to be one of the little ones in the pool (even if it meant having to wear waterproof Huggies).

The Marvelous Pigness of Pigs

His talk was entitled: Benchmarks of Truth. He shared 10 benchmarks to a very enthusiastic crowd, but it was not as packed as I imagined it would be for probably two reasons: 1) the weather may have taken a toll on a lot of fair-goers. We were fresh from a dubiously air conditioned car, and everyone else had been walking around outside and in exhibit halls; 2) Joel’s latest book was overtly written to the Christian community, which is only a fraction of MENews subscribers. He has been a perennial favorite at this event, but had “come out of the closet” since the last one. Joel has never hidden the fact that he is a Bible-believing, capitalist, lunatic, farmer, but in the MENews community, it was the “lunatic (and I may add: innovative)  farmer” that caught & held their attention. I suspect a sizeable percentage of the crowd were Bernie Sanders voters, so for Joel to emphasize that he is a Christian AND a capitalist was a bit sacrosanct. Nonetheless, it was a great presentation that appropriately ended in a standing ovation.

My mission for driving 2.5hrs to see Joel was two-fold:

Thus, after the speech, I just needed to be where he was going. Thankfully, there was to a book table set up for him in a hall next door. However, I thought he would exit stage-R (where we were seated), but he left stage-L…the opposite way! So I had to hustle across rows & rows of chairs to get to that side of the tent. Just before I made it, a woman came right up to me and asked: “Where did you get those [Paul Gautschi] books?” (I had 3 in my hand, but I was not displaying them…like waving them at Joel and saying: “Joel…Joel…remember me?” So it was so r-a-n-d-o-m that this lady would be at the right place to ask me such a question. Dozens of people were carrying books of all kinds around. Meanwhile, Joel is getting farther away! A bit flummoxed, I told her I had written the books & had not bought them at the Fair. She said she was hoping to get a copy someday (and kinda inferred she would expect see it at this venue). By now, Joel is entering the exhibit hall, so we followed the throng that was following him.

As we waited in line, I realized that I was going to have an extra book after giving Joel his & getting mine signed, so I let (Diane) know she could get the copy if she wanted. She was holding one of Salatin’s books, which he signed for her, and she was kind enough to snap a photo of Joel & I. Afterwards, she bought that copy of Growing Food God’s Way, and I happily signed it for her. I can’t explain how thrilled she was about the whole scenario. It really made her day…and it dawned on me later (as we were driving home) that maybe this trip wasn’t for David, or maybe not even for Joel, but perhaps the Lord led us to Albany because a faithful lady named Diane was going to be there and He wanted to bless her socks off for His delight. To that I say: Amen! (…and …Thank you, Lord, for the “Dianes” you put in our path)
DD