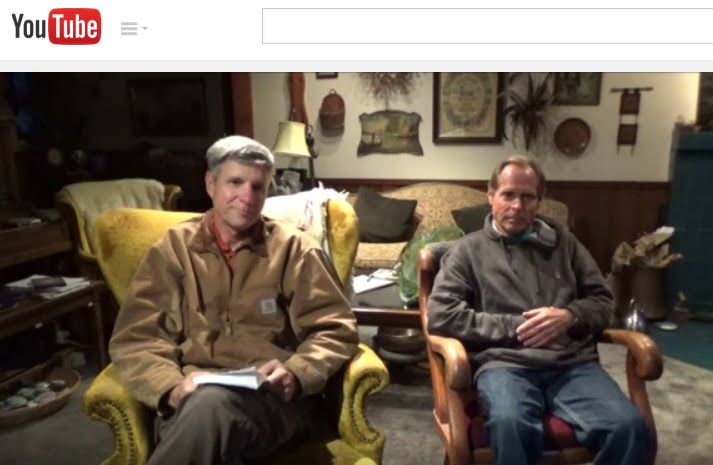 Talk about a random idea, but I was so hoping to make the  3.5hr drive to Paul’s garden because “Thatnub” from L2Survive fame was going to be there for the 2:30 public tour with his video camera again.  http://www.l2survive.com/

So we took in a great 3+ hour tour with about 20 people (less folks due to rain forecast…which we got toward the end). Nice, cozy group. As usual, pretty diverse, but no youngsters this time. Check out the beet Paul had a fellow pull out…  I call it “beetzilla.” It goes (darker color) all the way to the front of the pant leg of the guy behind the happy beet puller. 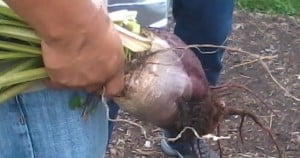 The guy was amazed at how easy it was to pull out. Later, I held it to get a feel for its weight. Can’t really guess, but it was a moisture dense veggie that felt pretty heavy.

This man and a few others had flown up to Seattle from LA to see the garden. He is an organic gardener down there. When he got to the cherry tomatoes, Paul invited him to eat one – which he did. Immediately he said: “Wow!” In fact, if he said it once, he said it 1/2 dozen times. He said he grew similar tomatoes in California, but: “…they are not like THIS.”

Here is another crowd photo in the orchard: 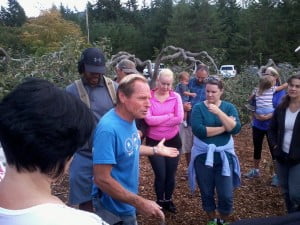 He had a family from Oregon come up Friday because they are friends of mine…a couple with their 5 kids. The 10yr old is not allowed to eat fruits because the diagnosis of her doctors was that she was fruit intolerant! Like many 10yr olds, she consumed 5+ apples. Two days later, I am  on the phone with the girl’s Dad and he told me she didn’t have any reactions. Yay God! In fact, he said her countenance was uplifted the whole time. Paul was both pleased and amazed that the little ones were eating voraciously.

A brother & sister from the Everett, WA area were in attendance. They are fine young people…home educated, and their family runs a nursery & farm stand called Fruitful Farm.  http://www.fruitfulfarm.net/

Afterwards, Thatnub sat Paul & I in the living room to talk about the eBook and the paperback book. Here is a link to that YouTube: https://www.youtube.com/watch?v=1lxaJKHVcyY
(don’t ask me why Tirza – Paul’s dog – came up to me at the end)