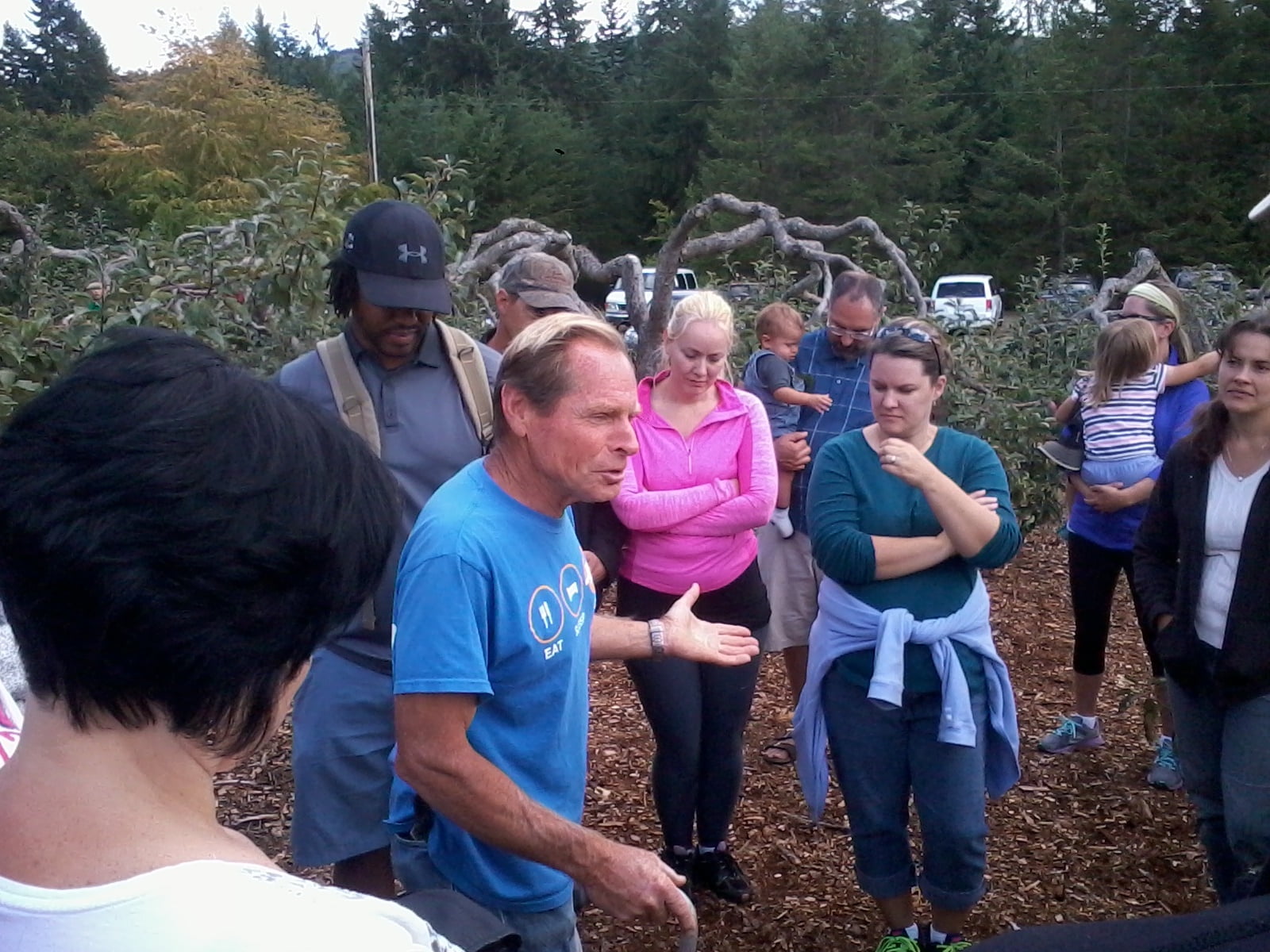 With pleasure, I was able to tag along with an MD friend of mine from Wyoming to drive up from Kalama, WA to the Gautschi’s place yesterday (during his 2:30 Sunday public tour). It was a typical sized group of about 30.

It was fun enough spending a lot of tine with an old friend, but it was very special to thing to me because it was three years ago that my wife Phyllis (along with daughter Elsie) and I met Paul there for the first time.

Unlike that very warm and dry day in 2012, this day was cool, with a couple of occasions of light rain. Yes, I had to put on my windbreaker in August!

Usually, his apples are not ready for FEC (full enzyme consumption) till mid-September, but he says with the extra warm summer we had, the apples and pears have come on early. So…I had a few. Mind you, I didn’t pick a single  one – th

ey were all gathered from the ground. The photo verifies that a bug had enjoyed it  first…but I just ate around it. Paul says it is the largest crop of apples he has ever had. One (Fuji) tree succumbed to the weight of the fruit and its branches (with apples in tow) were literally lying on the ground. As you know, Paul aggressively prunes to limit the amount of branches that will bear fruit. Folks were intrigued to see both Tova and Tirzah (Paul’s dogs) eating apples.

There were kids of all ages. Some were toted around in back carriers and others were as

old as pre-teens. Did they eat! Paul gets a special satisfaction seeing young ones eat the food items there. As usual, parents were gaping at kids eating food they never would have imagined they would eat (let alone of their own accord). Pictured is a shy & sweet girl who was busy devouring a cucumber. I had one too, and it was good. Cucumber has a way of cleansing our breath. I know a man from Australia who taught me to slice cucumber and hold it to the roof of my mouth for awhile. Afterwards, everything seemed cleansed. In this case, I went for a cucumber for hydration because I didn’t bring any water with me.

So what else did my friend Randy & I eat? Russian kale, a carrot, tyme, sage, Wasabi, grapes, a tomato, a fig, lettuce, fennel, pear, Lacinato kale, basil, a few blueberries, and cilantro (yum!) He said eating that fig changed his life (whatever that means). I guess he meant that he is adding figs to his palate of power foods. All totaled, we sampled 15 wonderful food items…and there were other things we didn’t get to try, like beets and Swiss chard. Understandably, the asparagus was long gone. 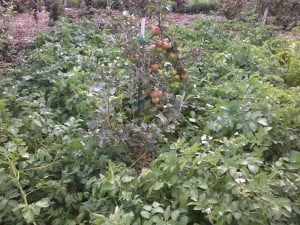 As usual, Paul is experimenting and pushing the envelope of permaculture  practices. What you see to the left is that Paul has  expanded his produce into his garden. Why? Because it has had wood chips many years longer than the  garden…so growth is very prolific there – as you can see the potato plants  surrounding his young apple

tree, Another thing is that he is more actively grafting his trees. Why? Not just because he can, but he is sensing that corporate agriculture is killing the country’s bee colonies, so Paul is encouraging cross-pollination via wind and close-by pollinators. Therefore, he won’t have to be bee-dependent. It reminds me of the verse in Proverbs 22:3 AND 27:12  “A prudent man foreseeth the evil, and hideth himself: but the simple pass on, and are punished. ” There is one interpretation of that verse, but more than one application. I would say that the principle of prudence is seeing the evil that may or will occur, and being prepared for the worse.
“If the bee disappeared off the face of the earth, man would only have four years left to live.”
― Maurice Maeterlinck, The Life of the Bee

His cross-pollination effort reminds me why it is so eventful to tour the garden and orchard with Paul. In a word:

wisdom. The supreme evidence that a person has spent hours in God’s word and memorized vast amounts of it is the constant wisdom that he exudes. It all starts with fearing (honoring) God. Another Proverb reminds us: “The fear of the LORD is the beginning of wisdom: and the knowledge of the holy is understanding.” Proverbs 9:10
Paul also fields many questions during his tours. He is a true mentor and continually exercises sensitivity to those around him. Granted, he is tough on college educations, educators, and allopathic medicine, but it is only to encourage us to think for ourselves and ask probing questions.

Last Friday, there was a brisk storm that blew through Paul’s community and knocked out the power. Two days later, the power was still out! As a consequence, I didn’t get a drink of Paul’s lovely water from the drinking fountain. However, since I was there last, he had a hand pump installed, but I didn’t photograph it. True to form, he had no complaints about the delay in getting power back. It had zero affect upon the tour.

The sense of peace and order I first experienced 3 years ago is still there. What is not still there is the dead crow. I asked Paul about that and he noted that the place remained a “crow-free zone,” so there was no reason to shoot one. All in all, I commend you to take a trip to his place if you at all can.
You don’t pay to park, there is no cover charge, Paul does not try to sell anybody anything…so there is no pressure. Folks respect him for that because we get hit up to by stuff for the garden all the time. I don’t know why, but folks sensed I was close to Paul and about four different people handed me some cash and asked me to give it to him. It was all given to him after Randy & I talked and prayed with…and for…Paul. Since it was none of my business, I don’t even know what it amounts to. I only brought up the subject because Paul doesn’t have a way to let these folks know he is grateful for their investment into his cause. DD